The continuous way of thinking

We have learned that the traditional application of drip irrigation often means that water delivery is too fast and too deep. To manage this, the industry adopted a pulse irrigation scheduling approach with many small and frequent active irrigations. These factors often combined to cause over-saturated subsoil, fertiliser leaching, hydraulic inaccuracy and other problems.

Luckily, drip irrigation technology has developed. We can now accommodate lower flow rates in drippers without increased fear of dripper clogging as Netafim’s low flow drip technology makes it possible to implement low flow rates, while maintaining clog resistant flow path dimensions. An outcome of low flow drip technology has been the Centralized Low Flow Drip Fertigation (further referred to as Continuous Irrigation) concept and a lot of work has been done to test the viability of this concept on certain crops.

Trials on tree crops showed that continuous irrigation solved many of the challenges faced in managing drip irrigation and the concept has found increasing application in the South African citrus and macadamia industries especially.

Higher efficiency
Some of the most important advantages of continuous irrigation are improved hydraulic accuracy and uniformity. The introduction of integral pressure compensated drippers in the early 1980’s did a lot to improve the hydraulic accuracy of drip irrigation systems. However, when using drippers with higher flow rates, such as 3.5, 2.3 and 1.6 litre per hours, especially in sandy and rocky soils, irrigation involved a few short irrigation pulses of less than an hour duration per day. Regardless of using PC drippers, the filling and emptying of the irrigation system can lead to severe over-and-under irrigation in places.
The fact that the irrigation system is no longer repeatedly emptied and refilled to accommodate several irrigation shifts, significantly increases the efficiency of the system.

Consider a traditional system with two irrigation shifts made up of six one-hour pulses each. If the emptying and refilling of the systems takes 10 minutes, it means that the system is inefficient for 16,7% (10/60) of the irrigation time.

Better control
The greatest advantage of continuous irrigation remains the fact that we can better control the depth of wetting and reduce under and over irrigation- therefore improving water-use efficiency and soil aeration.

Extraction levels were traditionally used to maintain balanced water and aeration conditions within the root zone of the crop. With continuous irrigation, this is achieved through expansion and shrinkage of the wetted area whilst constantly applying water to a portion of the root zone. A crop’s water demand will typically follow a bell curve over the consumptive period of the day (see figure below), while, with continuous irrigation, water application will remain constant. This entails an oversupply of water early and late in the day and an undersupply during the peak water consumptive period of the day. The wetted soil volume compensates for this with a buffer for shortages.

With shift irrigation, the soil will go from dry to wet to dry to wet etc. We are now able to keep the soil wet throughout. If we understand the way plants take up water, we will understand that the dryer the soil gets, the more energy the plant will use to take up water. This, of course, is energy that the plant could have used for growth. If we keep the root zone at a certain wetted level throughout, the water is much more accessible to the plant, it uses less energy for water consumption which will eventually translate to a higher yield.

Other advantages of continuous irrigation include:

It is important that we change our way of thinking about irrigation design to adapt to the possibilities set out by low flow technology and concepts such as continuous irrigation. The designer has to remember a few facts in the continuous way of thinking. Remember, the total success of new technologies depends on the correct application of these technologies.
The required water application of a certain area does not double if the number of trees planted in the area is doubled. We therefore should not use the amount of water per tree calculated for a certain tree density as benchmark for other calculations. Application rates always refer to volume of water per full planted hectare. It is important not to confuse mm/h or mm/day as a rate over the wetted area of the crop. This It is the rate over the entire hectares, both dry and wet.

Continuous irrigation requires a change to pumphouse and mainline design. As irrigation is no longer done in shorter shifts where the irrigation of blocks is alternated, but blocks are continuously and often simultaneously irrigated, dedicated mainlines to each block with a central pumphouse are required. This seems to indicate a disadvantage as it requires higher initial cost. However, dedicated mainlines also allows you to separately manage different soil types and apply a different fertiliser recipe to each block. It also makes automation easier and will lead to savings later on.

Design criteria and changes
Although the good far outweigh the bad, no concept is ever without its disadvantages. Continuous irrigation systems make meticulous maintenance a necessity and require that the drip lines are flushed out more often and various maintenance activities be done more regularly. Due to a smaller cross-section of the flow path, low-delivery drip irrigation systems further require finer filtration grades.

Continuous oxidation treatment is a crucial maintenance activity for continuous irrigation systems. Netafim recommends that the system design include a central chemical dosing from day one and that you install dedicated equipment for the continuous injection of an oxidising agent.
As described in Netafim’s open field drip irrigation design guide, the design criteria are as follows: 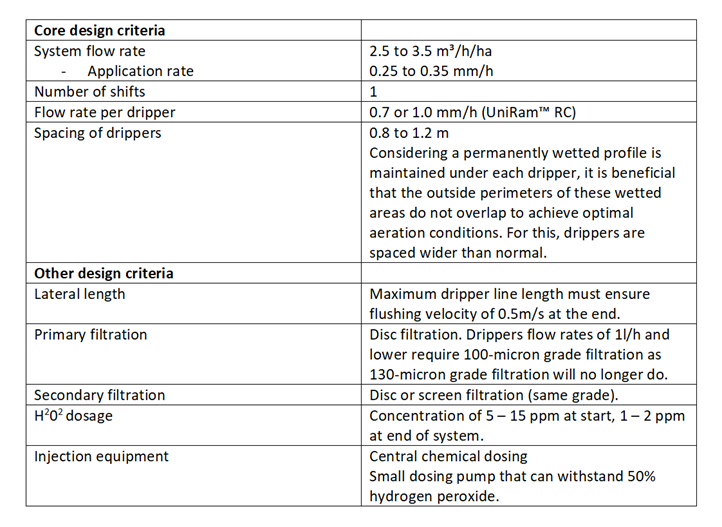 The use of continuous irrigation has shown that the actual water requirements of certain tree crops are much lower than traditionally thought as orchards are showing constant and even higher yields with much lower, yet more efficient water application. Farmers are often amazed to see with how little water certain tree crops can do.

We highly appreciate your comments and suggestions!